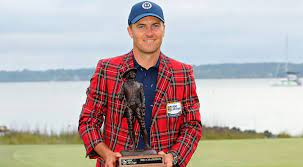 Jordan Spieth went some way to making up for his Masters disappointment by going out and winning the Heritage Classic despite putting like… well, putting like me. Absolutely risible stuff, missing putts from as little as one foot. I lost count of the three or four footers he didn’t make and apparently out of all of the players who made the cut he came dead last in strokes gained putting.

I *think* that’s a good sign but maybe it isn’t. “Winning without a putter” as he described it is impressive in its own way but it definitely isn’t sustainable. Spieth reminds me of Fred Couples in that there’s always something mad going on with him. He’ll go in the water and then sink a 50 footer for par, or he’ll fail to get out of a bunker but then hole his next shot. There’s never a dull moment and that’s why he’s one of the most popular players out there.

Ordinarily I’m happy to see him winning as the game is better when Spieth is relevant. When he went all Rickie Fowler for a while it was sad, so his resurgence over the last 12 months or so is good. I didn’t want him to win this week though as I was, let’s just say, financially invested in other golfers.

Most of them crashed and burned, including my boy Cam Smith who said during the week that he was over his Masters disappointment and there would be no hangover. Just what I wanted to hear, so not only did I place my usual fiver on his to win, I also threw on the eight quids worth of free bets he’d won me after his eight birdies in round one at Augusta.

Then he starts his opening round with a double and is four over through four holes. Imagine what he’d have shot if had suffered an Augusta hangover. He never really recovered from that bad start even though he did battle and only missed the cut by one.

Last year’s winner Stewart Cink started well with a 67 that had him nicely placed at -4. Although I didn’t back him to win, I did have a little go on him finishing top ten. So I was smelling myself after his opening round and actually said to the lads in our golf WhatsApp chat that “betting on Cink in this tournament is just like buying money”. He then shot 75 to just about make the cut and ended up finishing 78th of the 79 who played the weekend. Jinxed myself good and proper there.

Corey Connors gave me a decent run for my money but just couldn’t get close enough to make a charge, but my big hope was Lowry. Let’s not sugar coat this though, he absolutely blew it, as did virtually everyone else who had got themselves into contention. Without wanting to take anything away from Spieth, the rest of the field just backed through the hedge Homer Simpson style to leave him the last man standing. Ok, so Cantlay didn’t. ‘The Count’ at least made Spieth work for it by forcing a playoff, but even he could have won it with a makeable putt on 18 that he didn’t really go close with. I expect more from him there because when he had that hot run last year he never missed anything inside 15 feet.

What a disappointment Shane was though. I really fancied him this week as he’s been in contention every week for what seems like forever. I picked up a few quid last week after doing him to finish top five at Augusta so this time I just went for the outright win and not the place. After all, his form has been great and a win was surely coming. It still might be coming but now I’m sceptical about that because he should have won this. I can’t believe he didn’t as he figuratively had one arm in that ugly looking tartan jacket before throwing up all over himself.

That chip into the water was ridiculous. I know it was a tricky shot but the one thing you can’t do there is double. Nothing wrong with leaving yourself a 10 footer or even longer for par. A bogey isn’t the end of the world but you can’t drop two. Shane gave himself a great chance to pull one back and force a playoff with a stonking tee shot into 17, but then he missed a putt that he absolutely needs to be making if he wants to win.

I may be over-reacting here, but other than Rahm and Hovland I reckon betting on any Europeans to win is just throwing money away. Top tens and top fives, yeah you can cash in on those bets all day. Winning though? I can’t really trust hardly any of them. Ok I’ll add Rory to that list because when he’s up there he can finish it off, but I’m very much in “show me” mode with Fleetwood, Lowry, Hatton, Casey, Fitzpatrick and the rest.

I root for them, I really want them to make me look stupid for doubting them, but more often than not they’ll just leave you disappointed. Then again, I felt that way about Scottie Sheffler last year when I backed him a few times and he kept finding ways to not win. Look at him now, he wins every time he tees it up.

I see Ryan Palmer has somehow managed to pair up with Sheffler this week at the Zurich Classic. This guy is the Brad Pitt of golf. Brad would hook up with whoever the most desirable women on the planet was at that time, whereas Palmer just goes out and partners up with the best player in the world. A couple of years ago it was Rahm, before that it was Justin Thomas (when he was actually winning things). Now he’s pulled Scotty. Fair play to him.

On the subject of JT, I’ve had one of my trademark changes of heart with him. I couldn’t stand him after his Ryder Cup shenanigans. Just the sight of his stupid face would send me into a rage. And I was comfortable with my dislike of him and was more than happy for it to continue into this year. The problem is, he’s actually really likeable and a good follow on social media. I’d see him tweet something and I’d think “that’s actually quite funny” but then I’d scold myself. “Don’t laugh at anything JT says, remember what a dick he was in the Ryder Cup?”.

After a while though it just became too difficult to carry that grudge around with me and I’ll reluctantly admit that I quite like the lad now. That’ll change when the Ryder Cup comes around again but for now I’ll say, yeah JT’s alright.

Right, so the Zurich this week. I like this tournament as it’s something a bit different which makes it interesting. Not as interesting as it could be as I don’t think the format is that great. It might work better if it was a joint effort with the LPGA. You could either mix up the teams or even have two LPGA pros going up against their male counterparts (obviously you’d have to figure out the logistics in terms of the different tees). I’d like to see that and I’m sure at some point we will do as I think there’s a market for that.

For now though the format stays the same and my boy Cam will be defending his title along with his partner Leish. I backed them last year and I’ll back them again, but they won’t win this time. Morikawa has teamed up with Hovland to form some kind of “Wonderboy Dream Team”. They’re my pick but I also like the Chilean pair of Pereira and Niemann, and I’ve got a few quid on Sungjai Im and his partner Byeong Hun An as well as a good outside punt.

What else happened this week? Let’s see. Well the line up for ‘the Match’ was announced and there are actually no golfers in it this year. It’s four NFL quarterbacks, who are no doubt all ridiculously good golfers (we’ve already seen Brady and Rodgers and know how good they are) but even so, does anyone really want to see that? This thing gets less interesting every year. By the time we get to 2030 it’ll be a Ben Hogan AI robot taking on Bryson’s Tik Tok mates.

It’s a shame as it was a great idea to begin with and the Tiger / Phil thing really captured the imagination. This feels like a waste of everybody’s time now but maybe that’s just me. We’ll find out with the viewing figures I suppose. I hate Aaron Rodgers so that does tend to cloud my judgement.

Personally I’d be trying to get Michael Jordan and Charles Barkley teamed up with Tiger and Phil and let them go at it. Imagine the side bets! Of course you’d never get Jordan to pay up as he’s a notorious welcher. He also hates Barkley these days too, which is a shame given that Chuck is the single greatest thing about America. Well, maybe the second greatest after those coated fries you get from Checkers. *drools* God bless America.